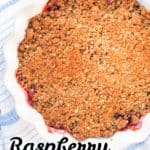 Raspberry rhubarb crisp is our favorite summer dessert! I make a mean apple crisp, and my peach crisp recipe is always a hit. We love rhubarb crisp and make it often. But there is just something special about adding raspberries. Rhubarb and raspberry crisp is such a great combo and is one of my most requested recipes!

Nothing feels like it’s summertime like the taste of rhubarb (I LOVE rhubarb!). We get lots of rhubarb from our neighborhood gardens. Our friends and neighbors have an abundant harvest all growing season so we usually get handfuls whenever we want it. Some of our friends brought us a cutting from their yard, and we’re super hopeful we’ll have our own bounty soon! 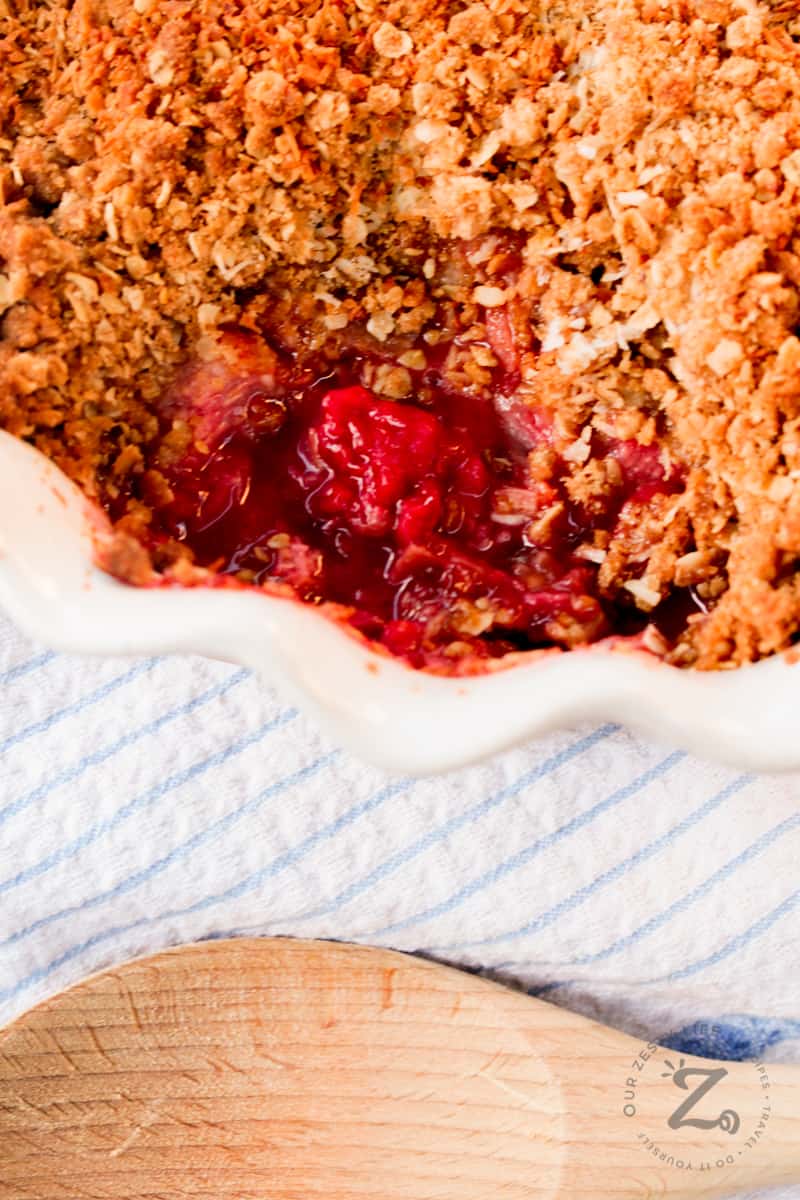 PIN this Raspberry Rhubarb Crisp recipe to your Desserts Board!

We make this amazing raspberry rhubarb crisp, along with Rhubarb Bars, over and over for our neighbors, family, and friends as a special thank you. They love it and you will too.

What Do I Do With All My Rhubarb?

Rhubarb is very tart and it requires a sweetener to bring out the unique flavors and make it tasty (edible). Sugar, maple syrup, agave, honey and brown sugar are some good sweeteners. Frequently rhubarb is paired with other sweeter fruit such as strawberries and apples. Rhubarb and strawberries is a very classic combination, typically served as strawberry rhubarb pie. 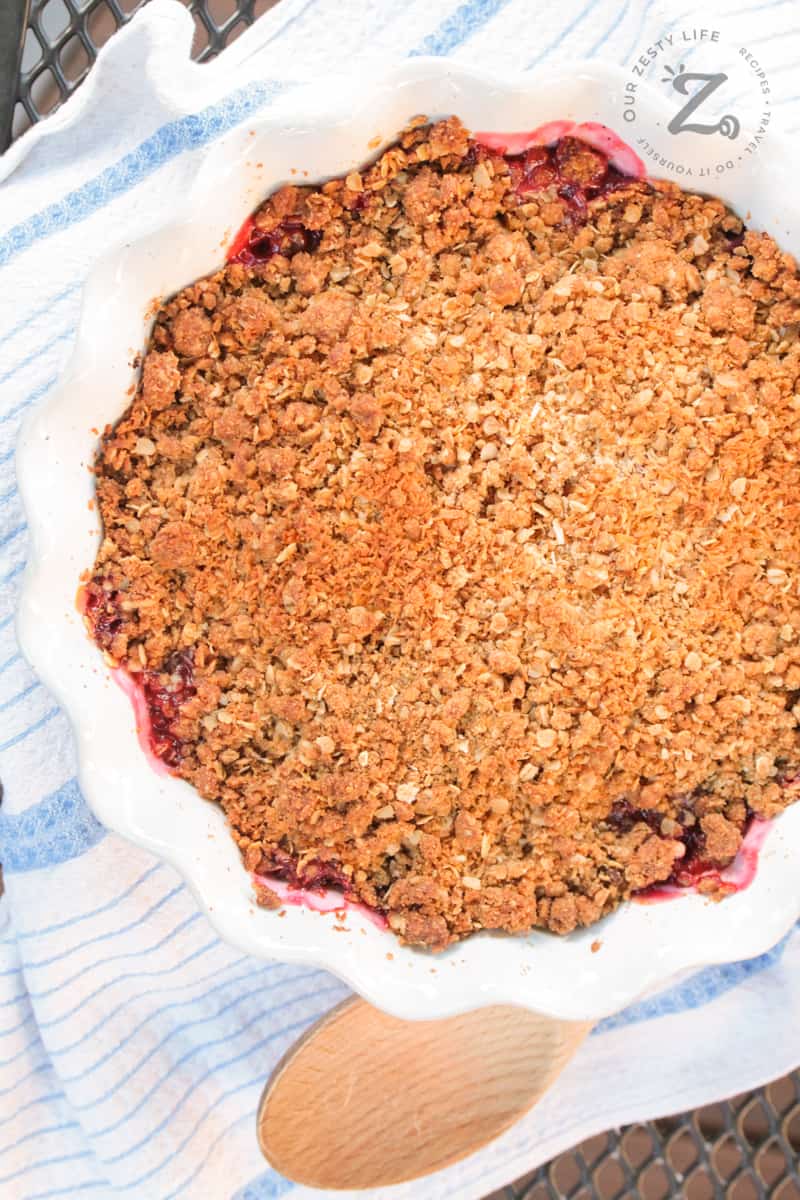 What’s The Difference Between Rhubarb Crisp and Rhubarb Crumble?

Some people use the word crisp and crumble interchangeably. They are very similar but there are subtle differences. Crisp is always prepared without a pie crust which makes it much easier to make. Crisp is all about the topping which usually has oatmeal, flour, and brown sugar. (I love adding coconut too!). Basically, it’s like raspberry rhubarb pie, without the crust.

Crumble is periodically made with a pie crust, but not always. The pie crust gives the crumble some depth, but it’s not really necessary to balance out the dish.

Crumble has a slightly different topping more simple topping, of cold butter cut into chunks and crumbled with flour, with a touch of cinnamon or ginger.

My family loves the topping on this recipe, so I usually double it. It’s an easy topping to make. I use a pastry cutter to cut the butter into the sugar, oats, and flour. Press the pastry cutter on the side of the bowl for best results. A fork works, but the pastry cutter will take about a third of the time! Don’t forget to double the topping recipe anyway, and put half in the fridge or freezer for next time! 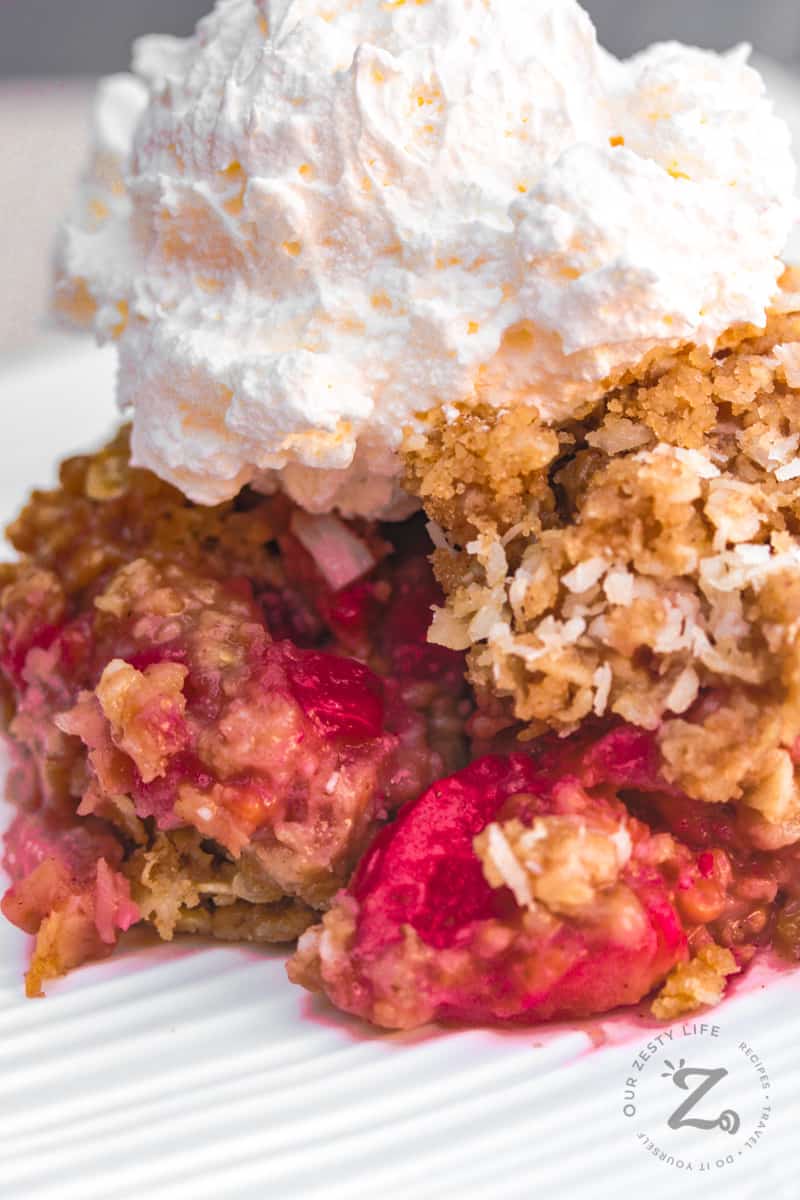 Is Rhubarb a Fruit or a Vegetable?

Rhubarb is very much like celery, with stalks. Technically, it is a vegetable, but it is mostly treated as a fruit, and often combined with other fruits.

If you’re wondering what fruit goes well with rhubarb, let me tell you, most fruit! The tartness of rhubarb pairs so well with berries, apples, peaches and so many other fruits. Obviously, I love rhubarb and raspberries paired together. Rhubarb berry crisp can be made with blueberries, strawberries, blackberries, or a combination of berries (but rhubarb raspberry crisp is my favorite, along with plain ol’ rhubarb crisp!).

Rhubarb can stand alone, however will need a fair amount of sweetness to give it a dessert status. Similar to cranberries, rhubarb makes an amazing sauce that can be enjoyed as a very simple dessert topping with vanilla ice cream. Make it zesty by adding some lemon zest or juice to the puree to give it a fresh summer flavor.

Do You Need to Peel Rhubarb?

Personally, I like to peel my rhubarb. I find that removing the stringy part of the stalks makes for a lovely texture of the cooked rhubarb. 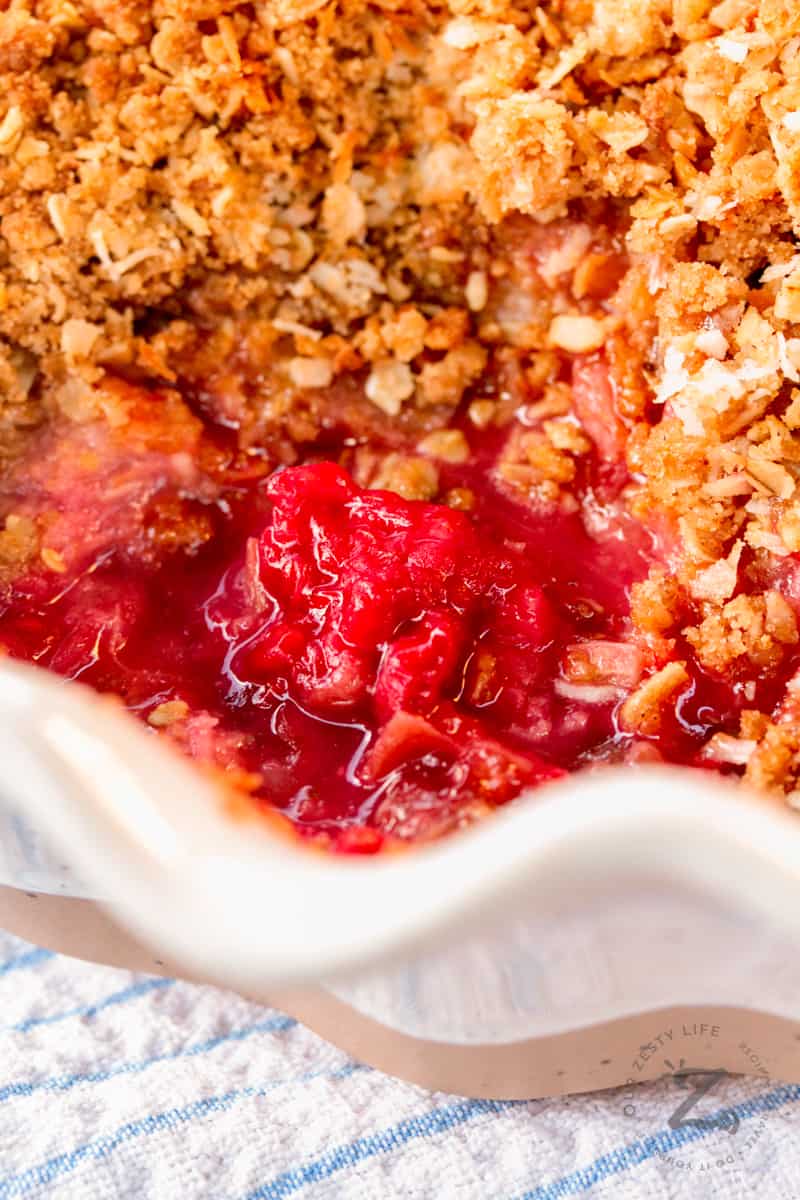 We had the traditional campsite grub – hamburgers, hotdogs, potato salad, and corn. Just as the kids were roasting marshmallows around the campfire (one of my very favorite things!), we served the raspberry rhubarb crisp and our out of town friends went crazy for this dessert. Their reaction and love of this dessert, as we watched the constellations appear in the sky, is a memory I will never forget. What is this dessert they asked? I recognize the raspberry flavor but what is this other fruit? Rhubarb? OMG! How can I get more of this?!

Rhubarb is a special treat and this dessert is too! Whipped cream or ice cream will make the crisp stand out.

Eat the leftovers for breakfast (but I skip the ice cream!)! 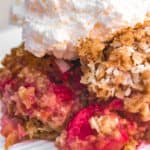 You may use 5 cups of any fruit mixture. If not using rhubarb, cut sugar to 2-3 Tablespoons and flour to 1 Tablespoon. If using frozen fruit, defrost and do not drain fruit. Smart tip: Double the topping and put half in a Ziploc bag in your fridge (or freezer). It will keep for a couple of weeks. Simply add to your next fruit mixture and bake as directed! 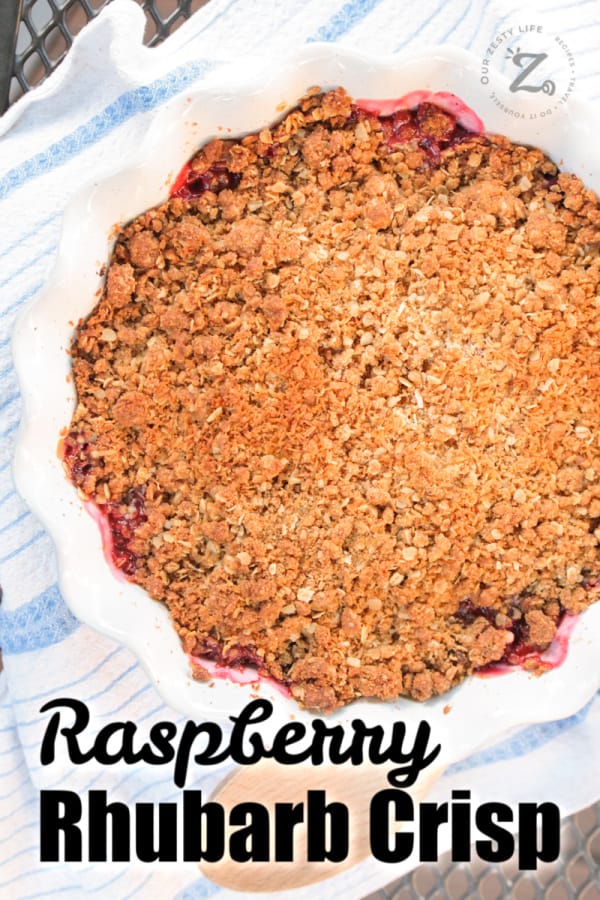 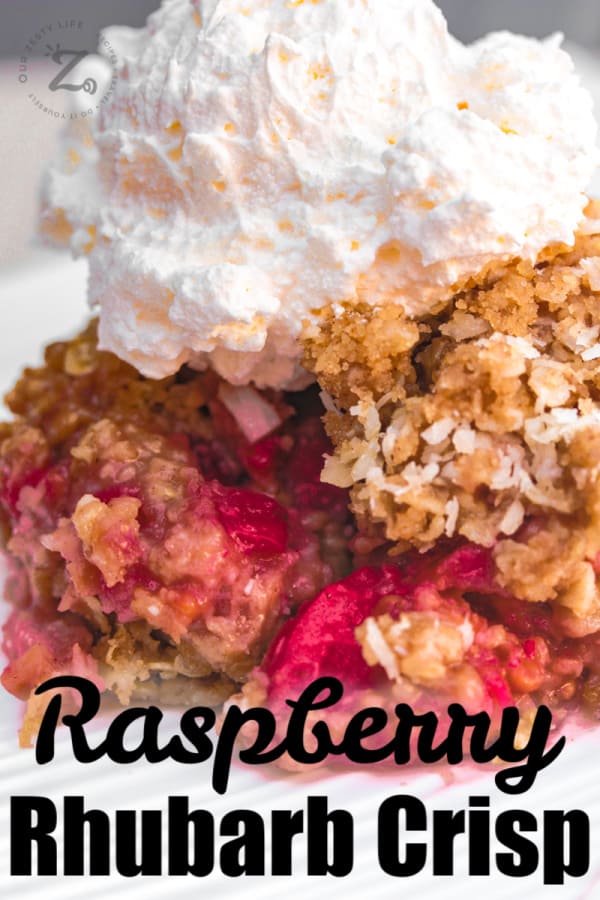 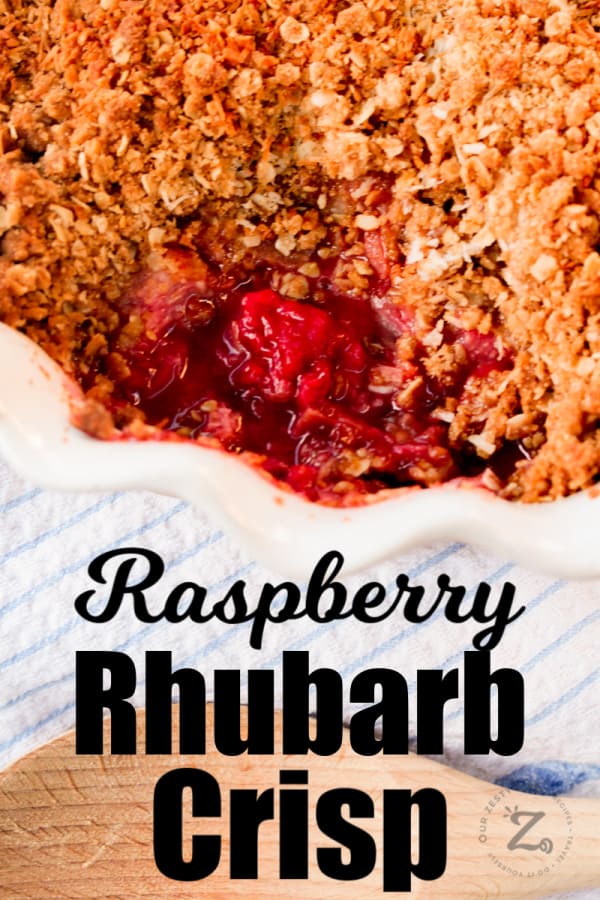 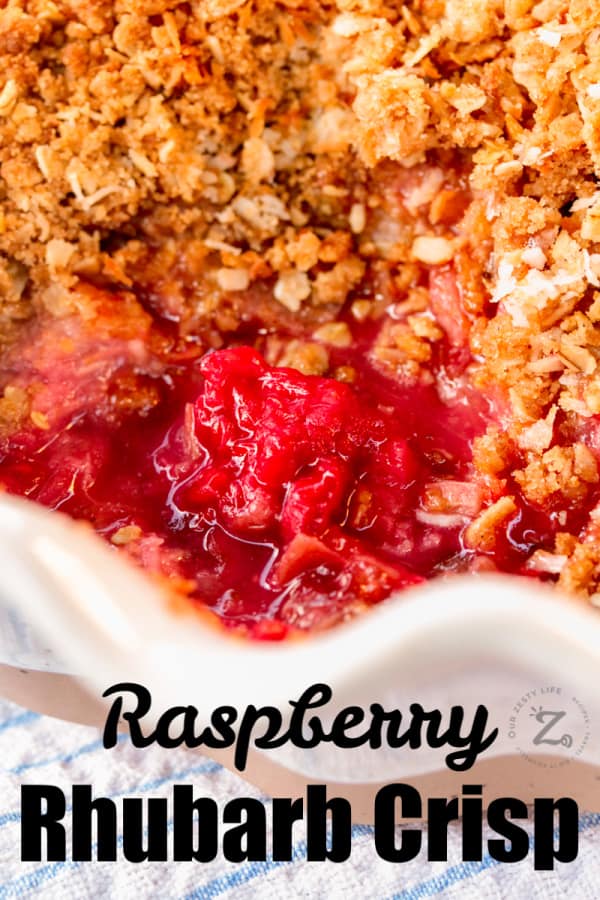