Combine sweet corn on the cob with BBQ spices and then drizzle with mayo dip in this irresistible Baked Corn Ribs recipe.

These strips of corn called ribs are an amazing side dish that can be made in the oven. But they can also be made in the air fryer, or on the grill. Made on the grill they are similar to elote style (grilled Mexican corn).  Drizzle with mayo dip and sprinkle with cotija cheese, fresh cilantro, and a pinch of ancho chili powder! They are generally eaten hot out of the oven, but there is a good possibility that they will still be devoured cold! 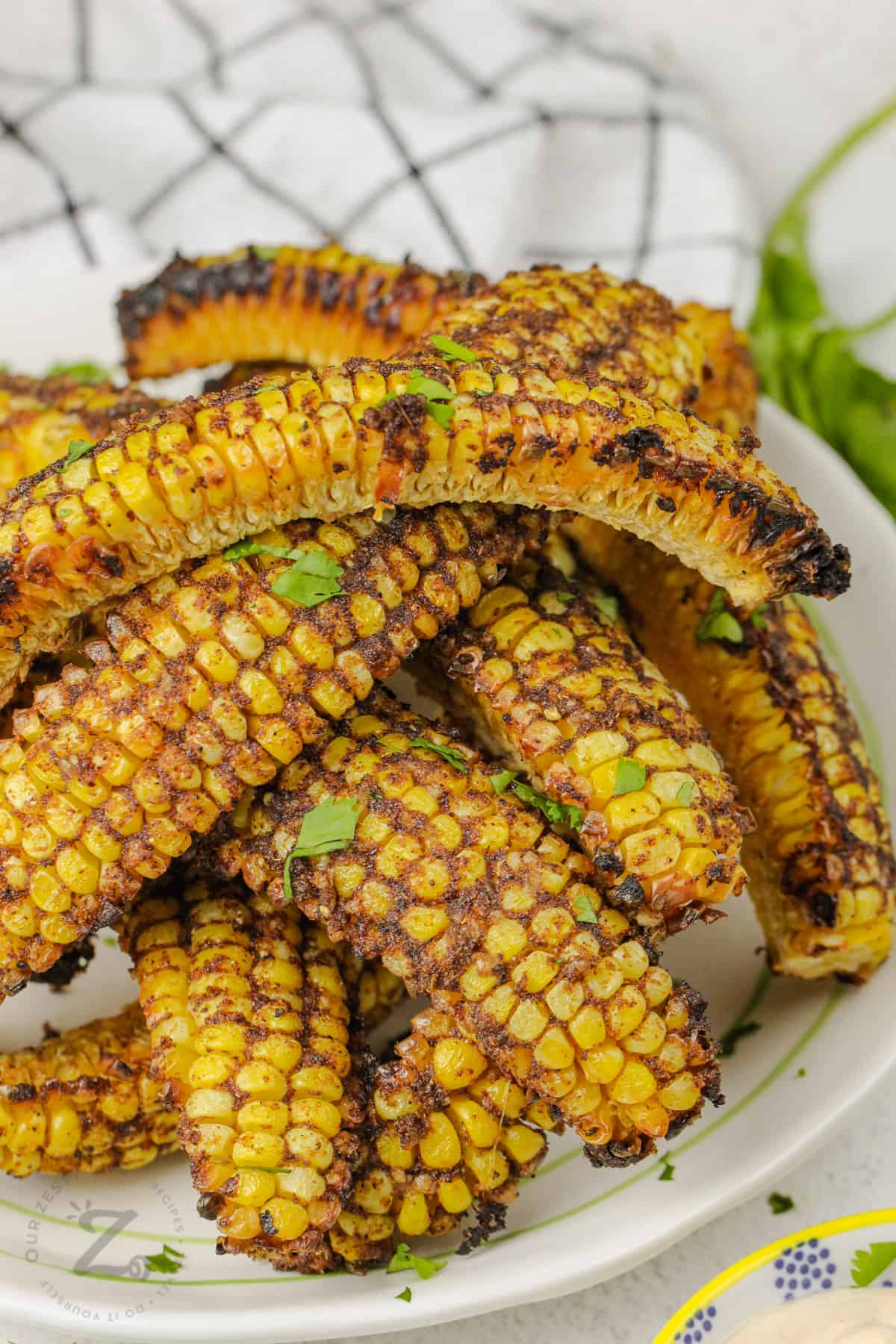 PIN this Baked Corn Ribs recipe to your SIDE DISHES Board!

What are Corn Ribs? 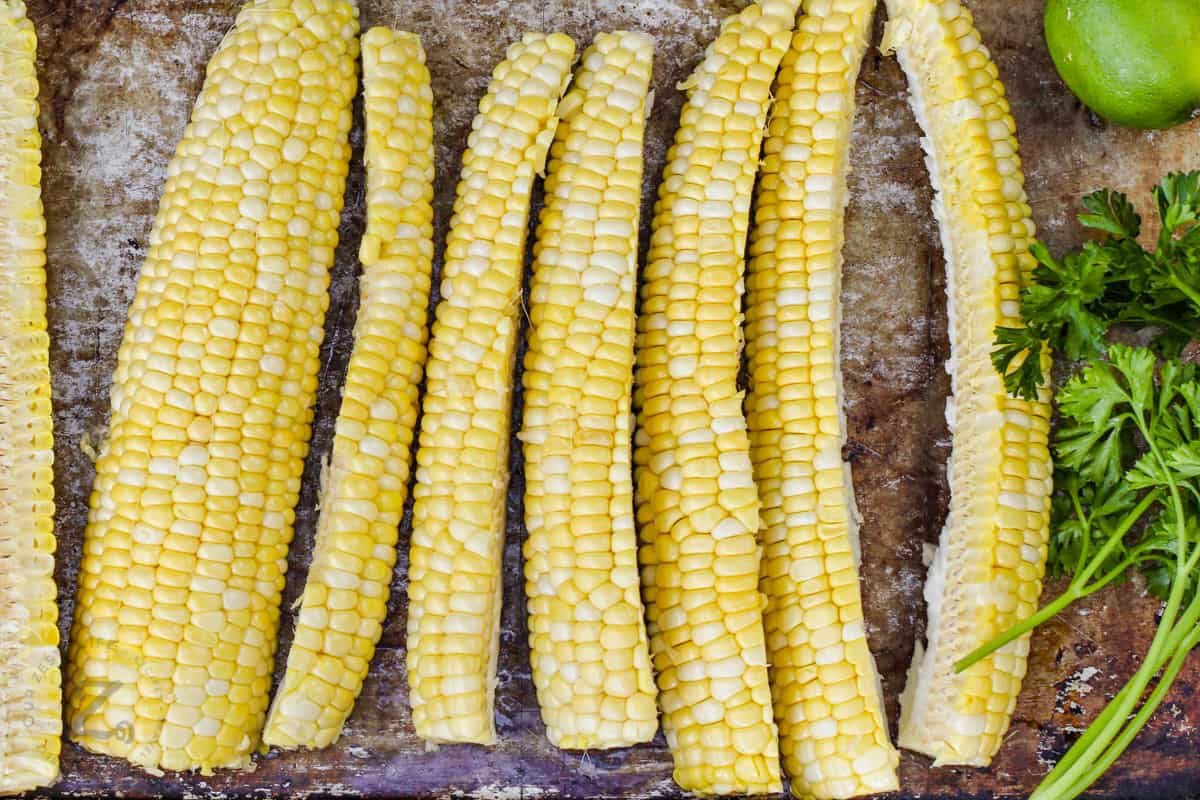 CORN – Two ears of corn are all that is needed for this recipe. Peel away the husk of the corn and remove any of the lingering corn strings. Cut corn lengthwise into 4 riblet sections.

BBQ RUB – Buy a premade BBQ rub or make the one included with this recipe.

MAYO DIP – This mayo dip is so quick and easy to put together. Just a little mayo with some BBQ sauce, lime juice, and salt. So simple and yet so flavorful. 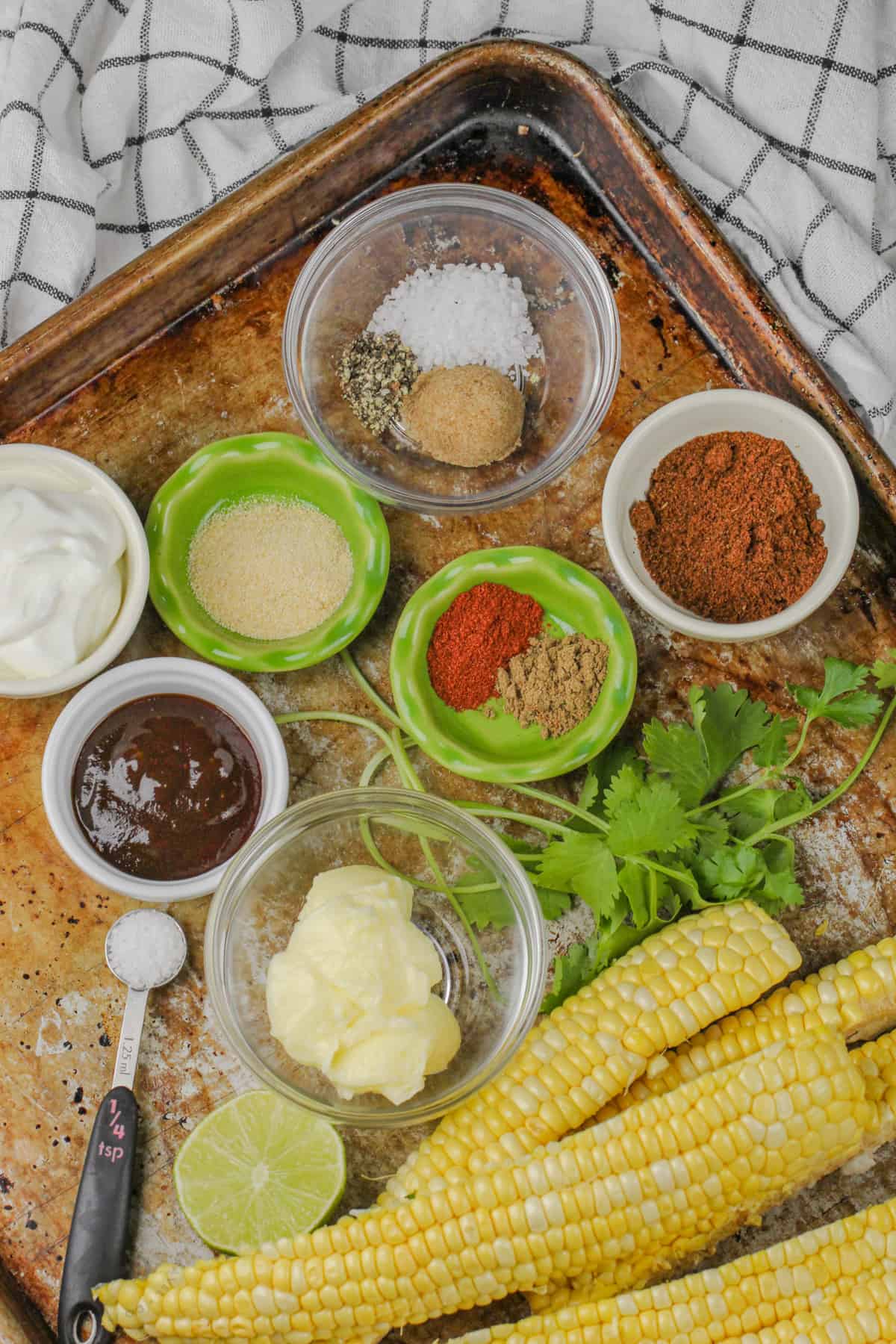 How to Make Baked Corn Ribs

Make these golden strips as a sweet and savory side dish or appetizer.

On the Grill – Place riblets on the grill and brush with BBQ sauce. Grill for 16 minutes turning halfway through.

In the Air Fryer – Coat the corn with butter mixture. Cook for 10-15 minutes. Or follow this air fryer corn ribs recipe.

PRO TIP: Use a knife longer than the length of the corn and use a cloth to help press down on the knife. Alternately, break corn in half before cutting lengthwise (creates 8 smaller corn ribs, per above) 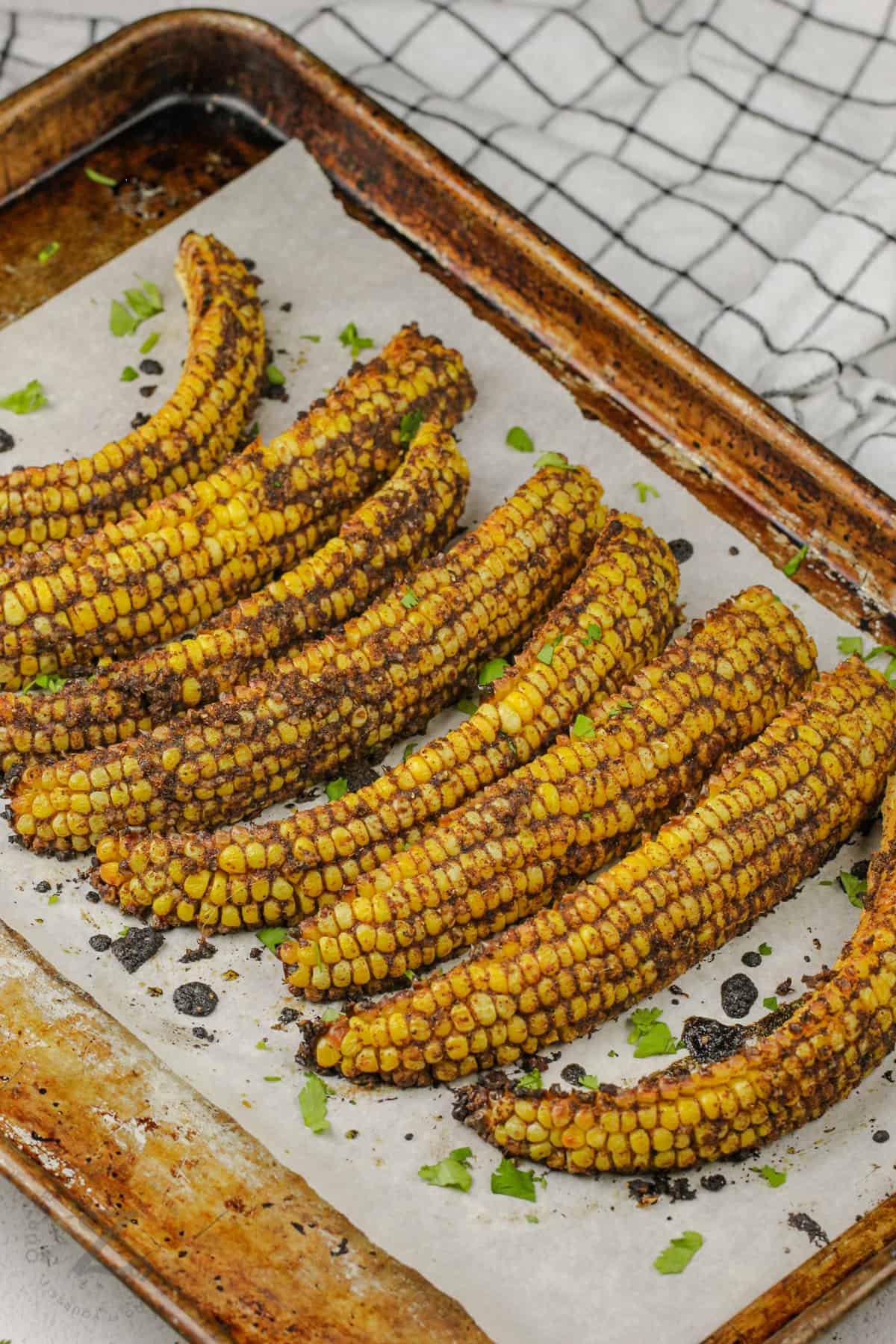 To make the corn easier to cut here are a few tips: 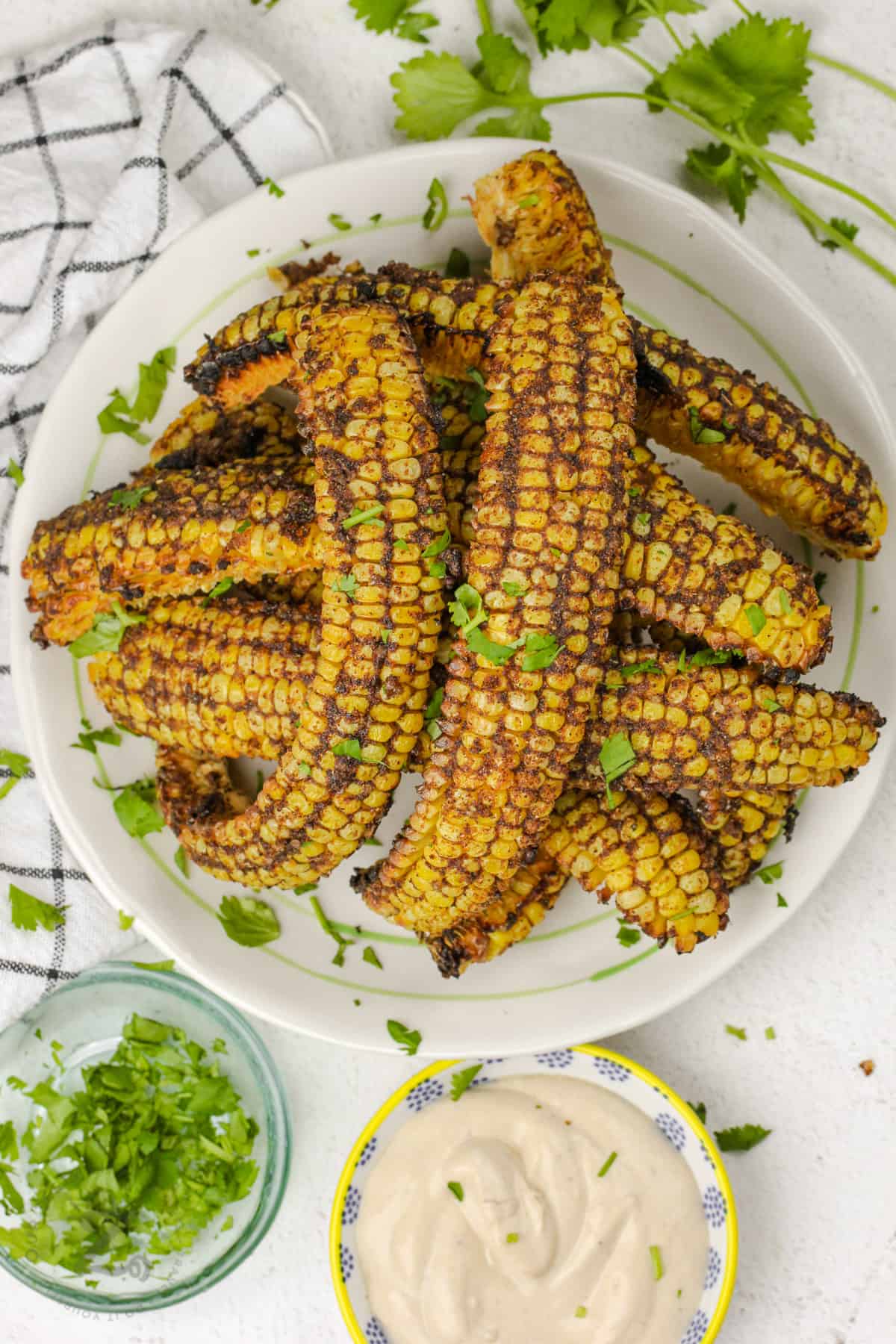 Corn ribs are best served immediately. However, leftovers will keep well in an airtight container in the refrigerator for 2-3 days. For long term storage, freeze corn ribs in a ziplock bag for up to 6 months.

To reheat corn, cover with foil (or uncovered) and heat in a 375˚F oven for 8-10 minutes or until heated through. Heat uncovered in an air fryer preheated to 370˚F for 3-4 minutes. If riblets are frozen, thaw for 30 minutes at room temperature before reheating. 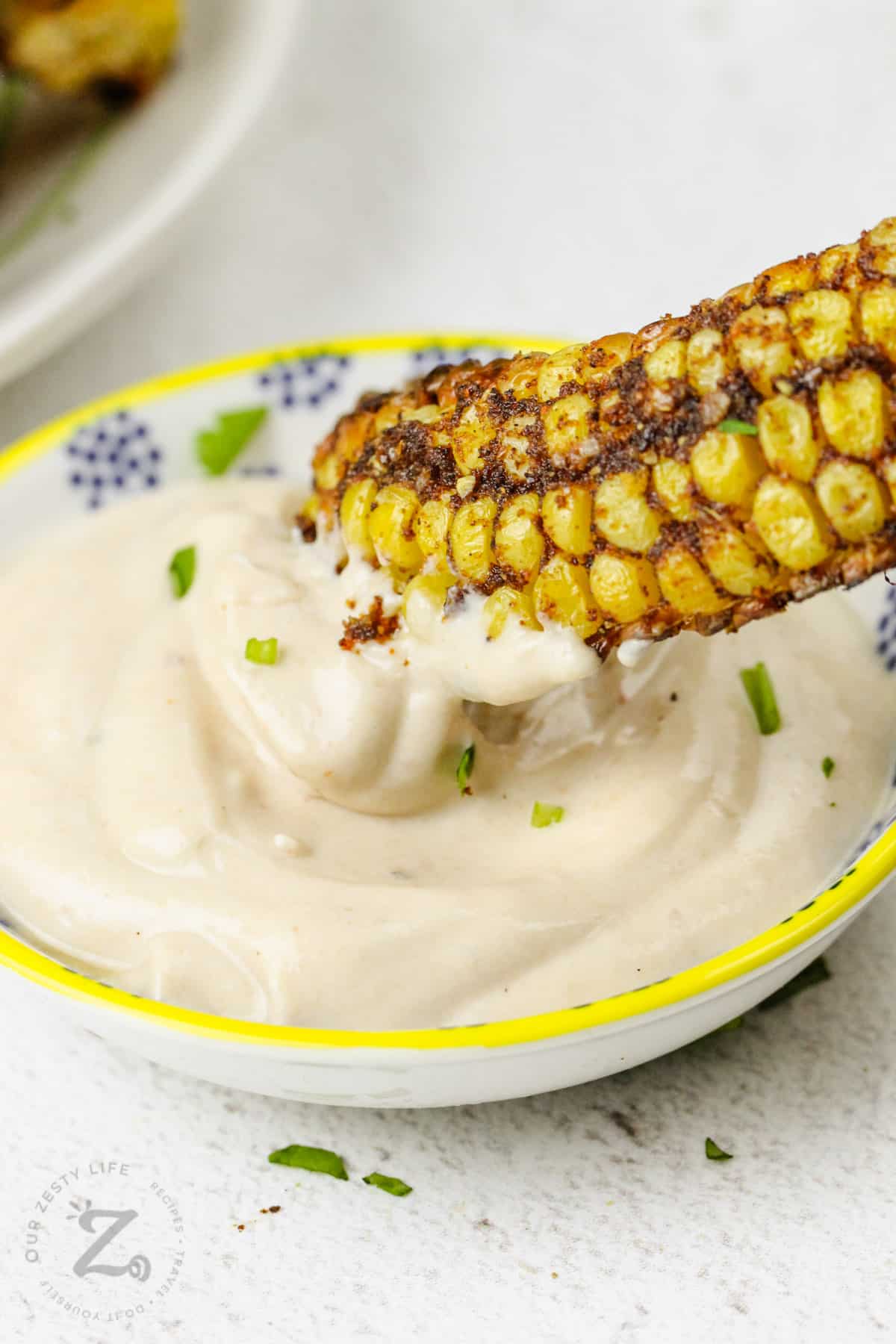 Other Easy Side Dishes To Try! 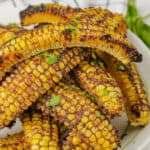 This corn ribs recipe is easy to make! Corn slices are seasoned with a BBQ butter mixture and baked in the oven for a delicious side dish or appetizer everyone will love.
Course Appetizer, Side Dish
Cuisine American
Prep Time 15 minutes
Cook Time 25 minutes
Total Time 40 minutes
Servings 4 servings
Author Candace
Follow me on Pinterest!Follow @OurZestyLife!

Nutrition calculated without the Mayo Dip *To create smaller corn ribs (8 per corn cob) cut ends off of corn cobs so that they are flat. Break or cut each cob in half (crosswise). Standing one piece of corn on the end, cut in half lengthwise right in the center of the corn using a very sharp knife. Rock back and forth and push firmly to cut through. Cut each half in half lengthwise again (either by standing up or lying the cob on the side). Cut through in the same fashion as before. Each corn cob will create 8 corn ribs cutting this way.  Pro Tip - use a knife longer than the length of the corn, and use a cloth to help press down on the knife.   These corn ribs are best served immediately, but will keep for a few days in a container in the refrigerator. Reheat in the air fryer at 370°F for 3-4 minutes or in the oven at 375°F for 8-9 minutes. 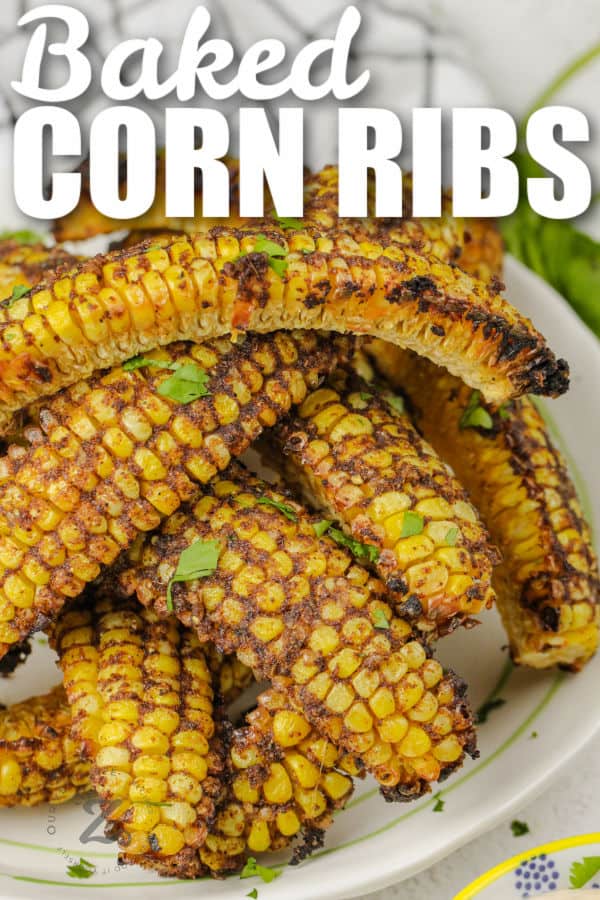 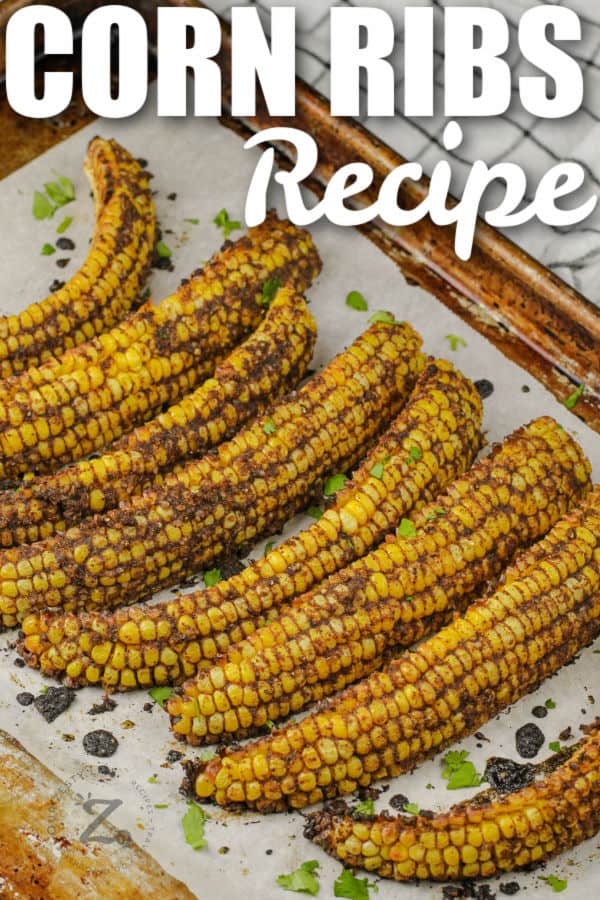 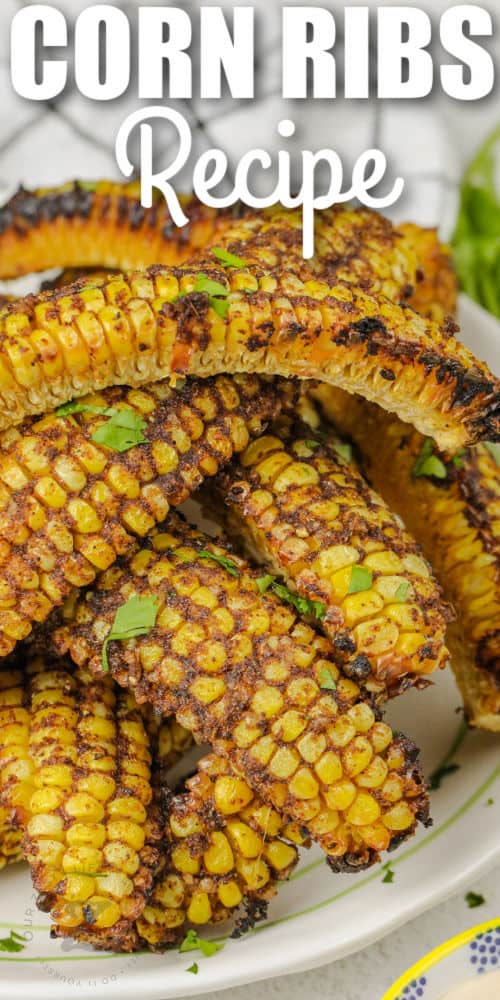 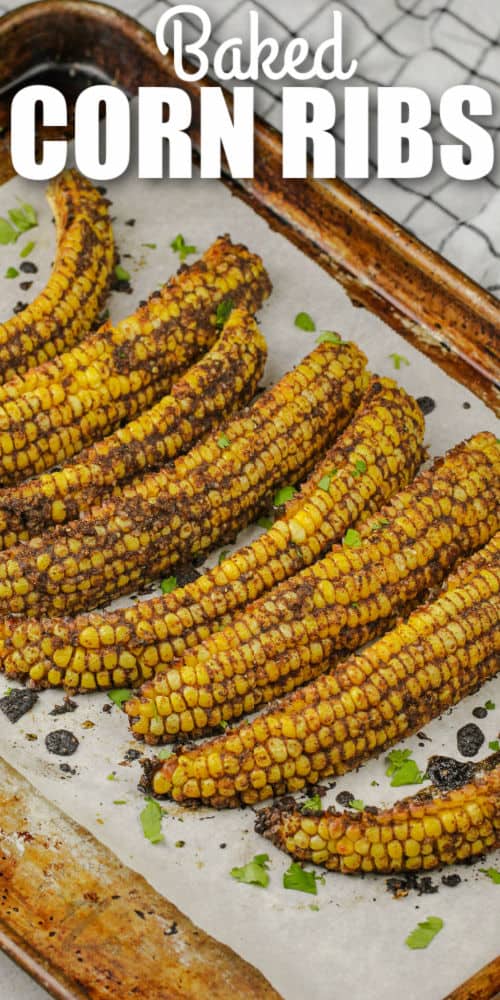 Whether it be a grilled breast, an oven-roasted ch