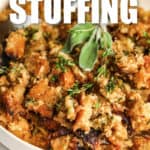 Sourdough bread stuffing starts with basic ingredients and some delicious mix-ins. Ready-made mixes from Costco that can be made on the stovetop are all well and good, but a homemade bread stuffing that can be used for Thanksgiving, Christmas, or any special celebration? It’s a must for every recipe box! 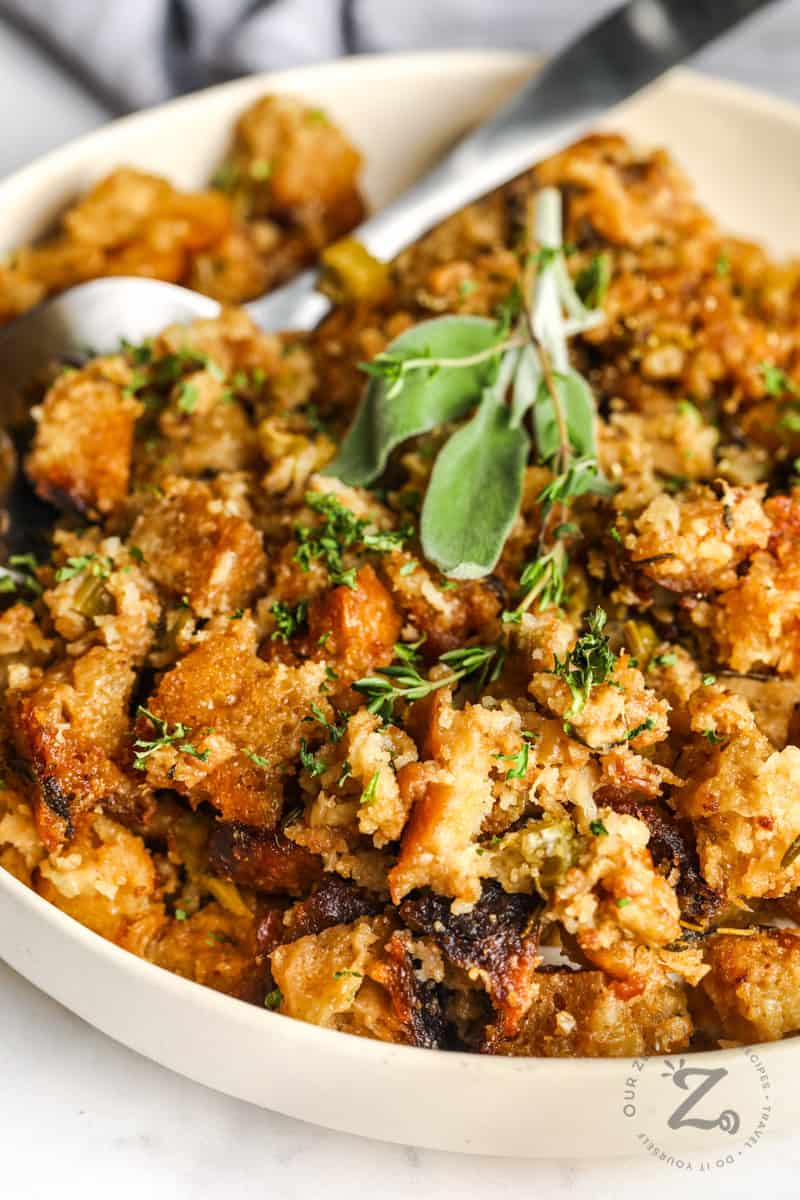 PIN this Sourdough Stuffing recipe to your Holiday Board!

Sourdough stuffing is amazing with turkey and gravy, and served alongside other special Christmas or Thanksgiving side dishes, such as more traditional mashed potatoes, crispy Brussels sprouts, and glazed sweet potatoes. Or, if you’re looking for something a little different, try it with baby potatoes with oven roasted beets and parmesan roasted broccoli. Also, don’t forget to use the bones to make turkey broth when you’re done with the holiday turkey! It’s the Thanksgiving bird that keeps on giving!

Is it Stuffing or Dressing?

Lots of home cooks get confused about the difference between the terms stuffing and dressing. Both terms are essentially the same recipe, but dressing is cooked outside of the poultry cavity in a separate pan. However, the terms for stuffing and dressing are also a regional thing; in the south, it is referred to as dressing, the rest of the continental US calls it stuffing. 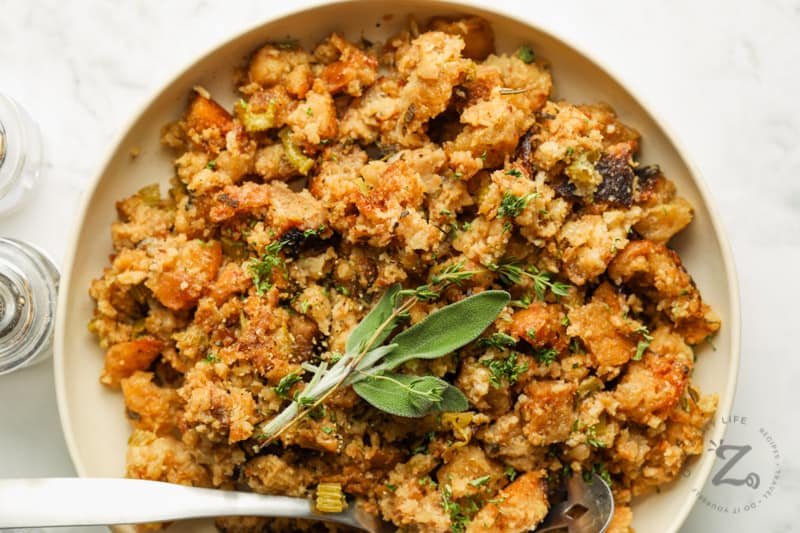 Why We Love Sourdough Dressing

Sourdough dressing is the perfect way to use up leftover sourdough bread! It’s got a little more substance than a regular dressing, with a slight sourdough flavor.

Few family recipes are more cherished than a sourdough bread stuffing recipe that has been passed down from generation to generation. Many regions have their own twists. For instance: 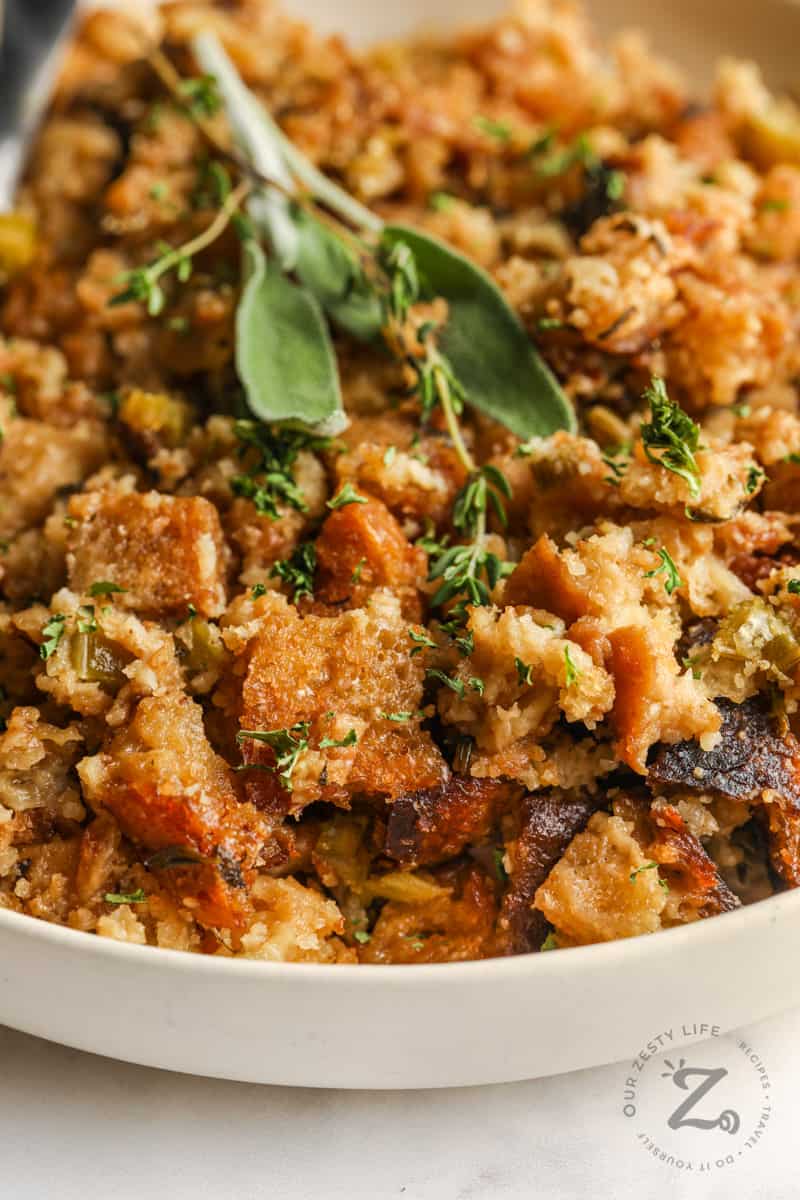 All you need for this basic recipe is sourdough bread, celery, onion, butter, and a handful of fresh, savory herbs and seasonings.

From this point, add whatever mix-ins fit into your particular menu. Regardless of where you live, the most popular mix-ins are ground sausage, cranberries, even chopped walnuts or pecans. Don’t forget about the regional variations for ideas too!

PRO TIP: For a recipe as special as this one, we highly recommend using fresh herbs, if you can. 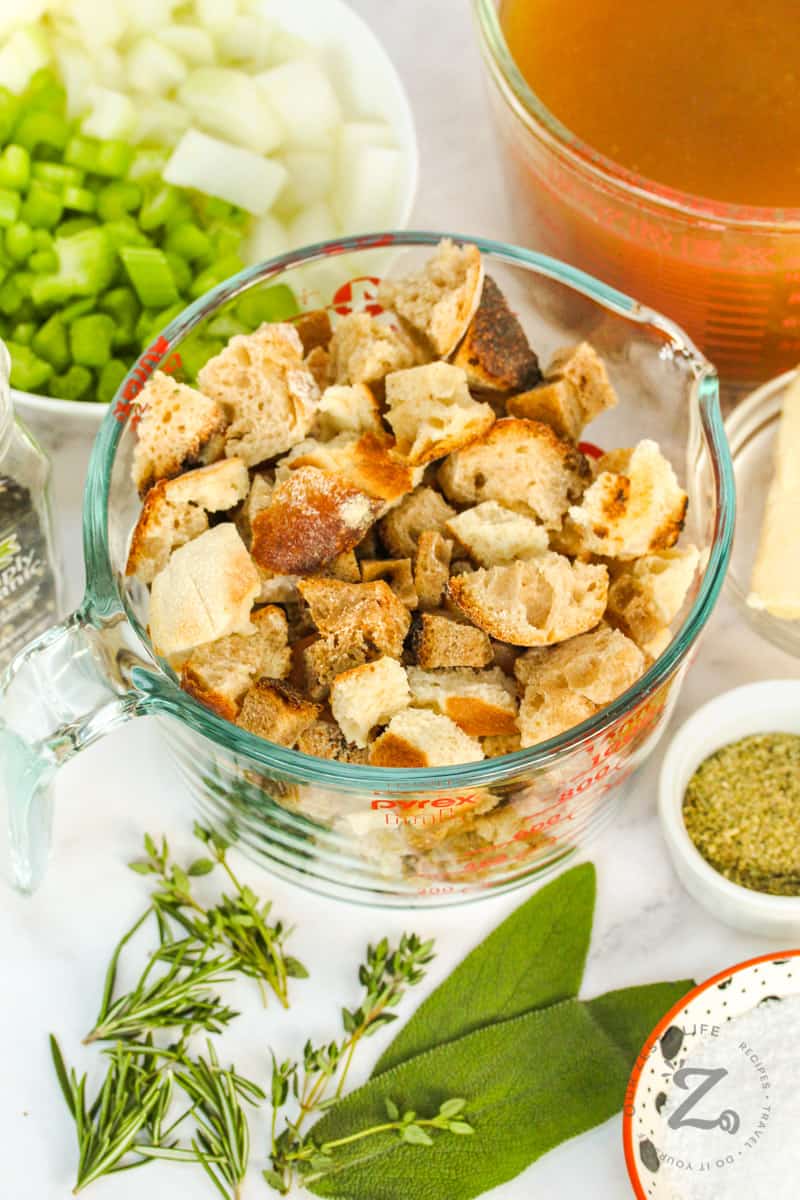 Homemade sourdough stuffing is as easy as 1, 2, 3! 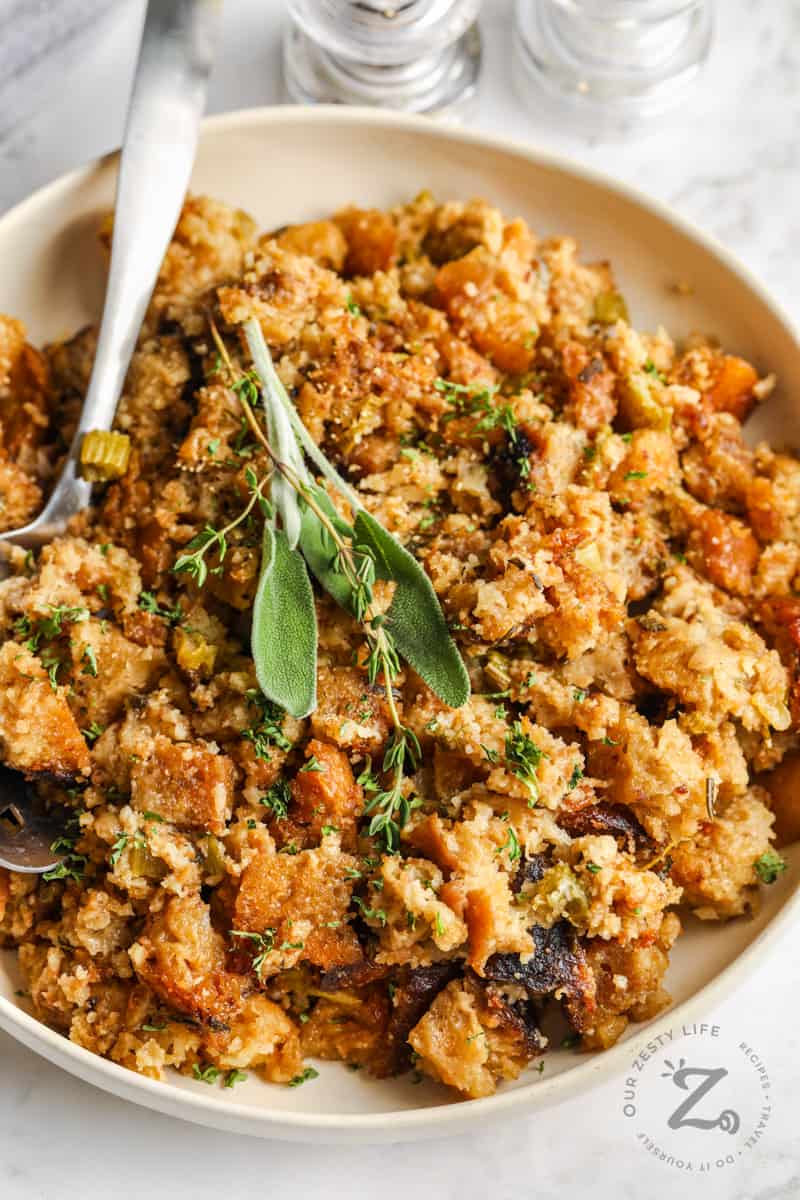 How to Stuff a Turkey with Sourdough Stuffing

PRO TIP: If using fresh sourdough, the day before preparing stuffing, place the cut cubes of bread on a baking sheet and let them sit at room temperature overnight so they can dry out. Or dry them in a warm oven (250°F) for about two hours before using. 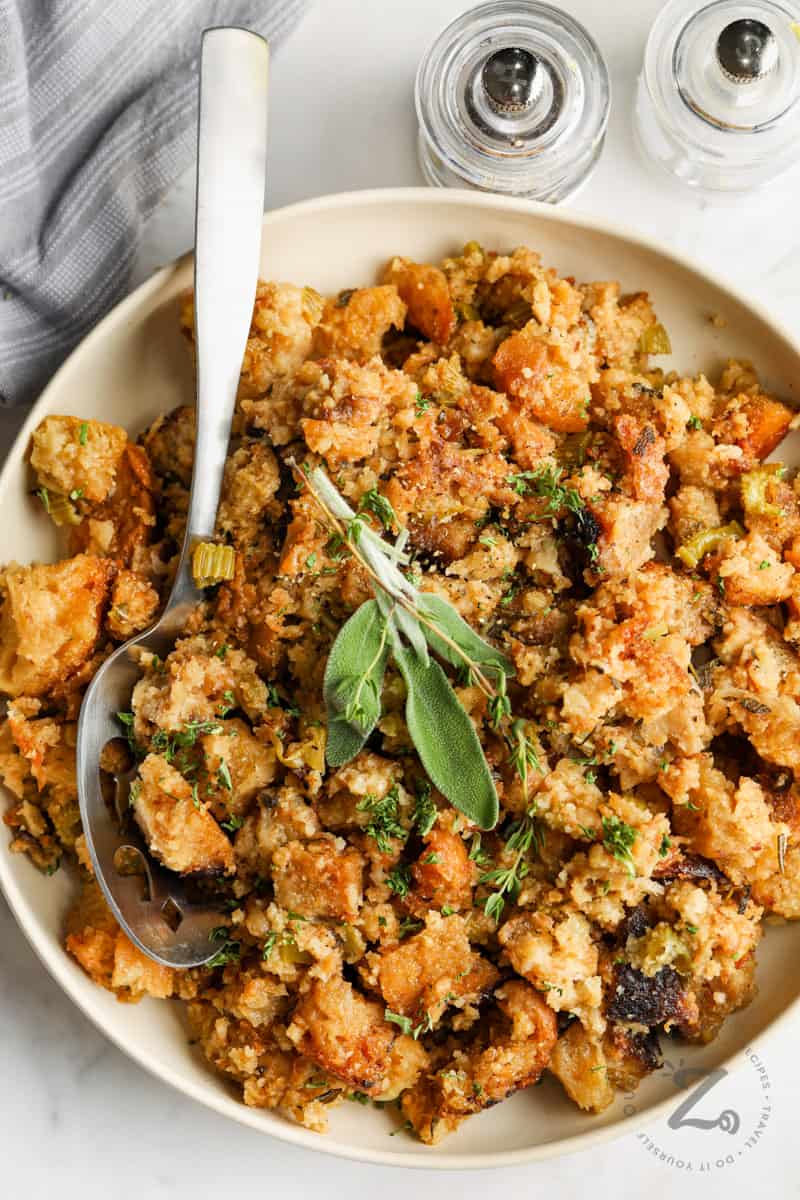 Leftovers are the Best! 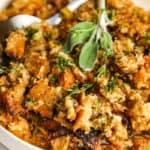 Store leftovers in an airtight container in the fridge for up to 4 days. Reheat stuffing in the microwave or crisp it up by spreading it out on a sheet pan and placing it under the broiler for about 4 minutes. 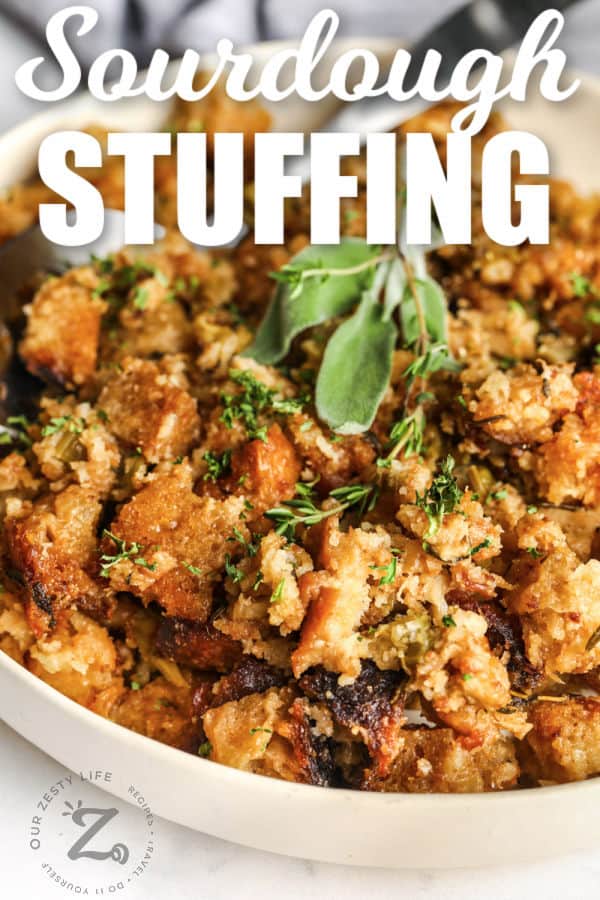 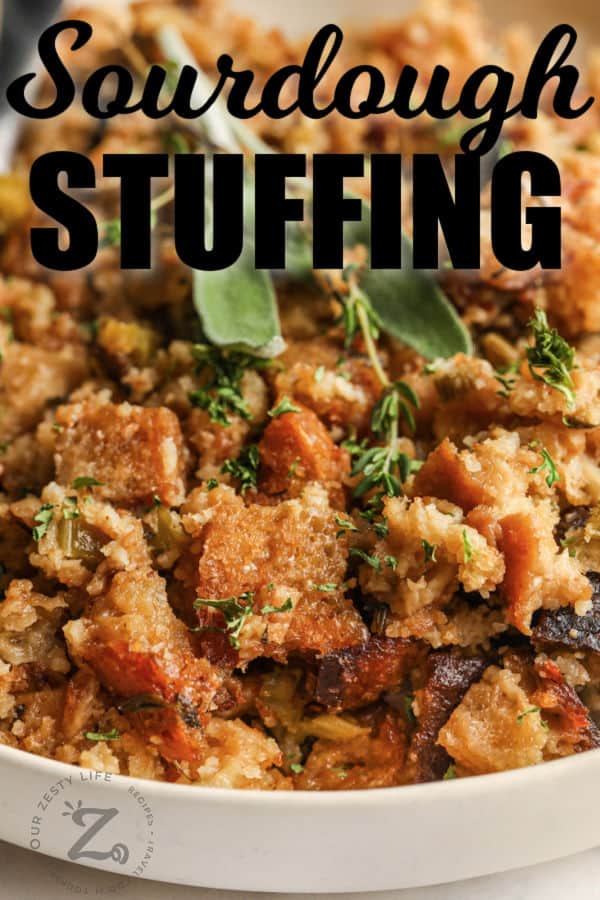 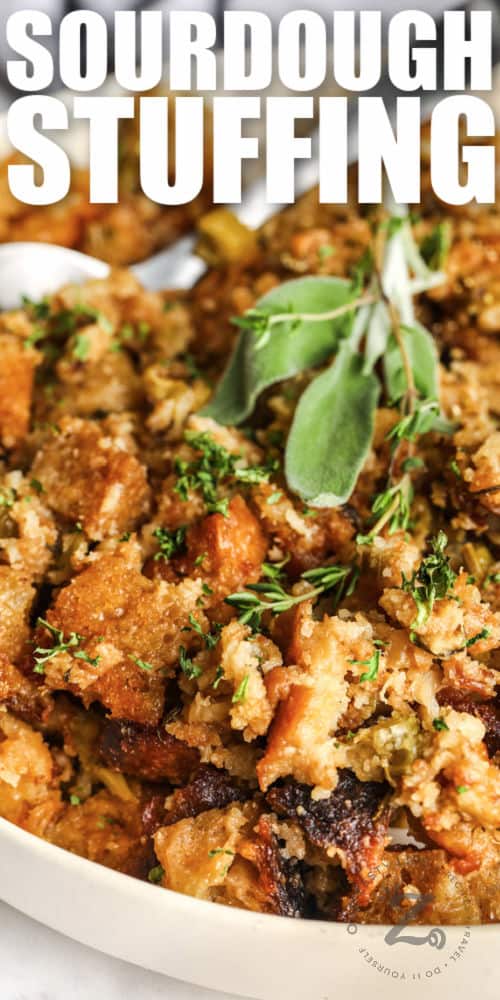 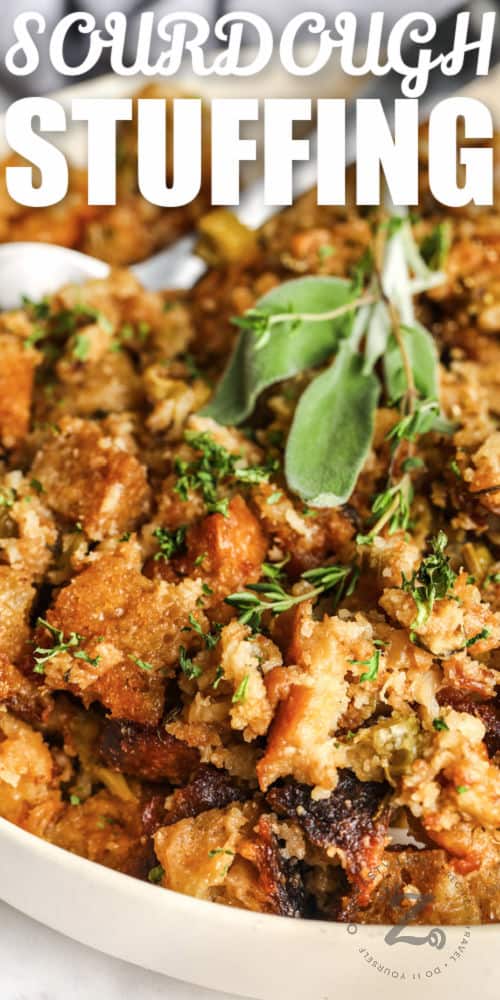