French Toast Casserole With Apples is all of the deliciousness of French toast, with the ease and convenience of a casserole. Make it the night before and pop in the oven in the morning!

This apple French toast casserole, which includes one of my daughter’s very favorite ingredients, a touch of cinnamon, is hard to resist! The last time I made this overnight French toast casserole recipe was for my 10 year old’s birthday sleepover party. All of her friends finished it off for breakfast along with a fruit salad and a mixed berry smoothie . 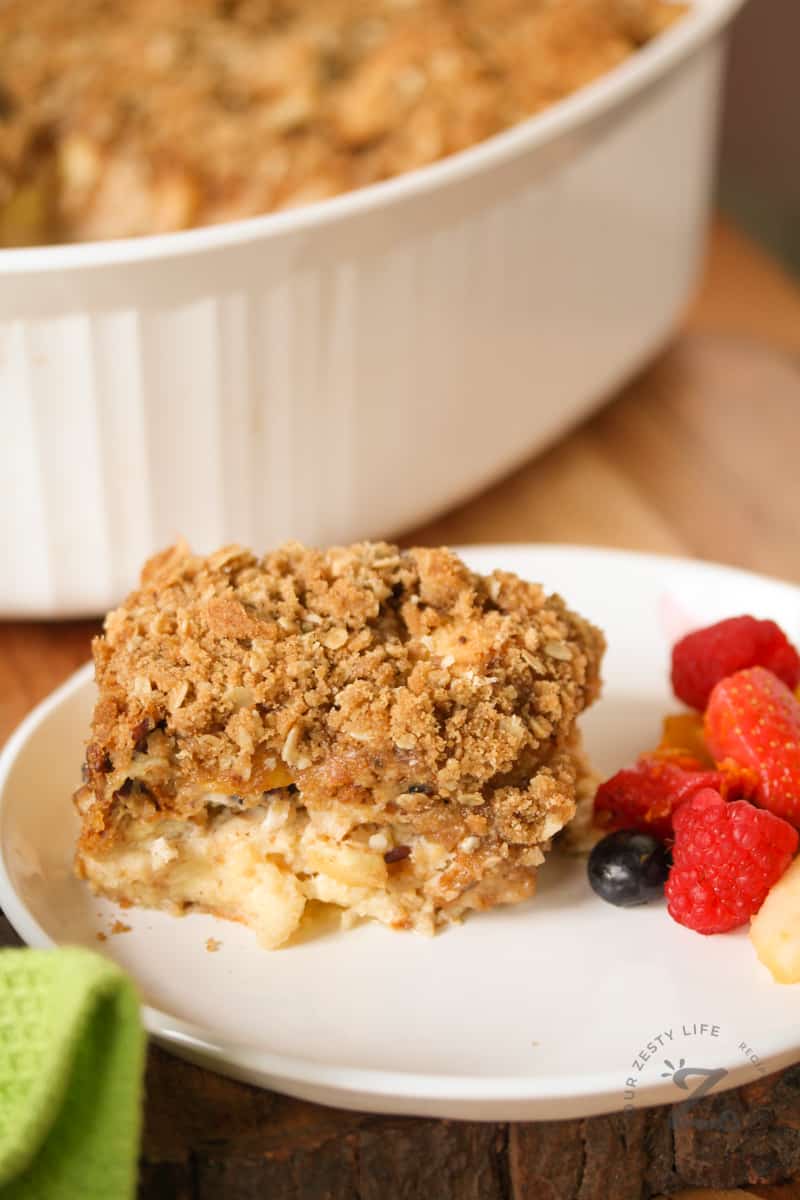 PIN this French Toast Casserole With Apples recipe to your Breakfast Board!

The French, bien sûr (of course)! French toast was created in the 4th or 5th century and was called Pain Perdu, which means “lost bread” or stale bread. It is a smart way to use up stale, dried-out bread and make a yummy dish, by soaking bread in milk and eggs and frying it. I just love French toast and when I make my recipe, everyone always asks for it.

I created this apple French toast casserole recipe after we’d picked up a case of apples at the farmers market. It feels like you’re having dessert for breakfast! 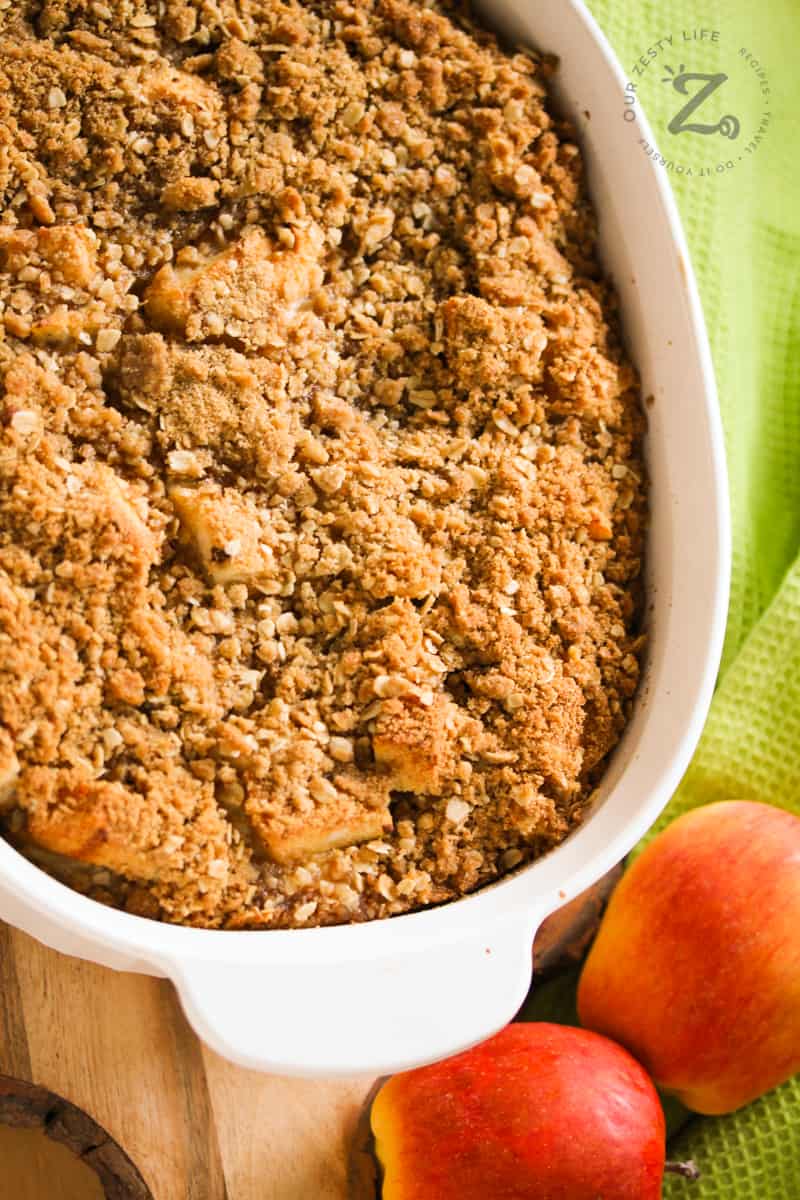 How to Make French Toast Casserole

I like to use whole wheat bread instead of white bread because it is a little healthier and has a great flavor. The highlight of this apple cinnamon French toast bake is the topping. French toast casserole with apples and a crunchy streusel topping is a brunch dish to get excited about! Every bite with a crunch of topping is delightful. 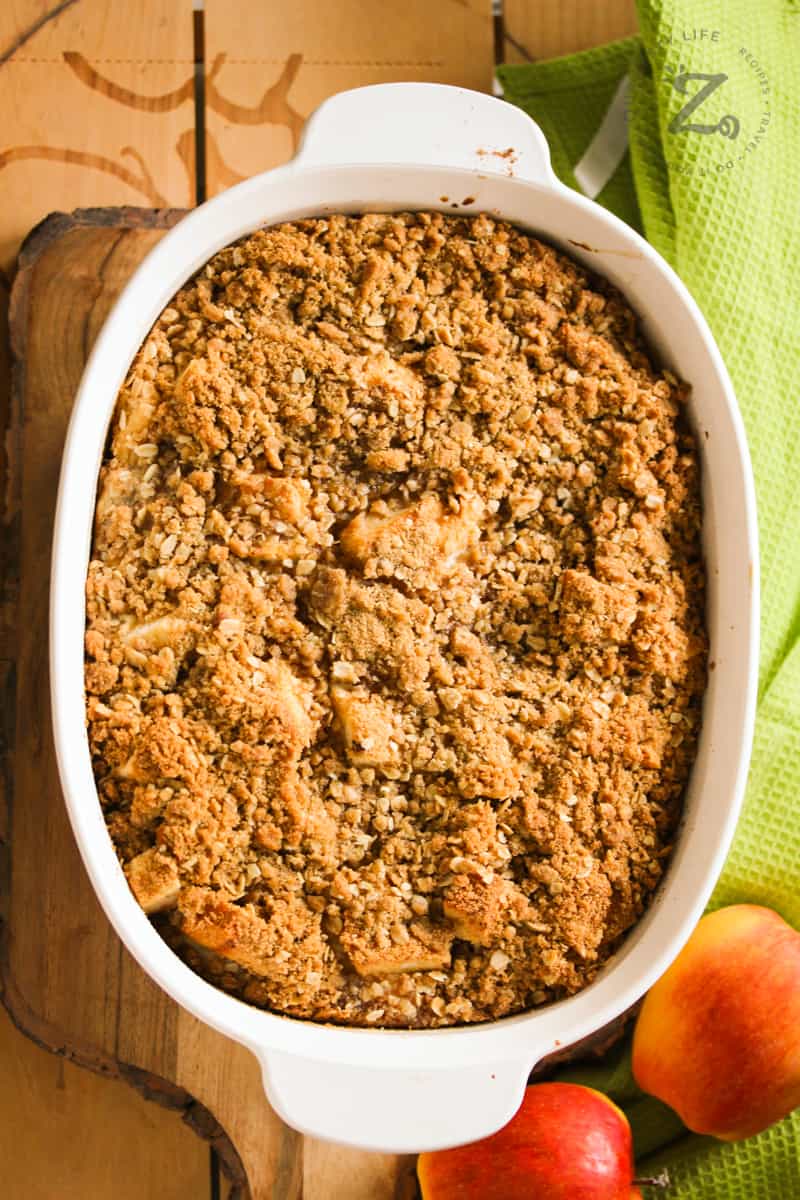 What Goes With French Toast for Brunch?

The same thing that goes with baked French toast casserole! I like to include sausage breakfast bake or curried sausage casserole. We love to serve this with a zesty fruit salad. Oh, and bacon. Definitely bacon! And coffee of course. Mimosas anyone? The kids love adding a blueberry banana smoothie to their meal.

If there are leftovers by some miracle, we serve this up for dessert with vanilla ice cream. I sometimes add walnuts or pecans along with the ice cream. 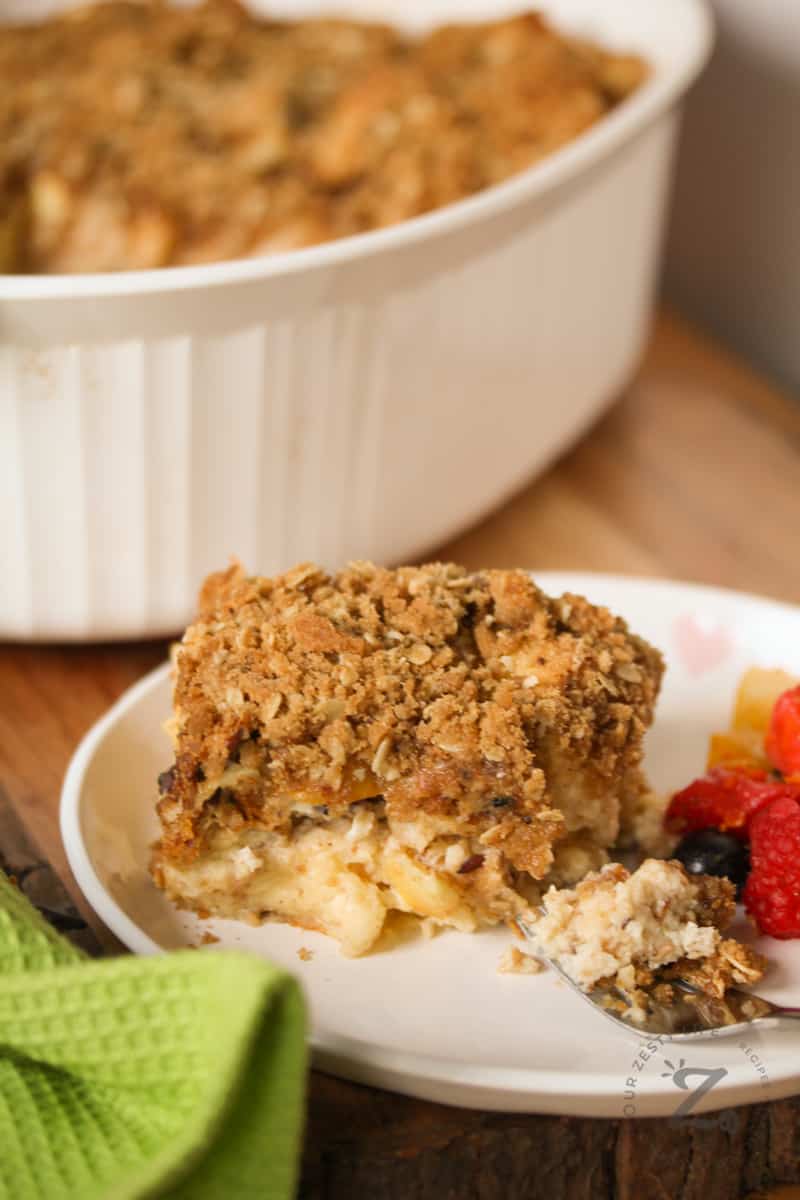 This recipe for baked apple French toast casserole is baked uncovered for 50-60 minutes at 350F, or until a knife poked in the middle comes out clean. At the 40 minute mark, check the topping to make sure that it doesn’t get too browned. If it is browned to your liking, place a sheet of foil loosely on top for the remainder of the baking time. 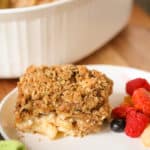 French Toast Casserole With Apples is all of the deliciousness of French toast, with the ease and convenience of a casserole. Make it the night before and pop in the oven in the morning!
Course Breakfast
Cuisine American, French
Prep Time 20 minutes
Cook Time 50 minutes
Resting Time 10 minutes
Total Time 1 hour 10 minutes
Servings 12 servings
Author Candace
Follow me on Pinterest!Follow @OurZestyLife!

Nutritional information does not include optional streusel topping 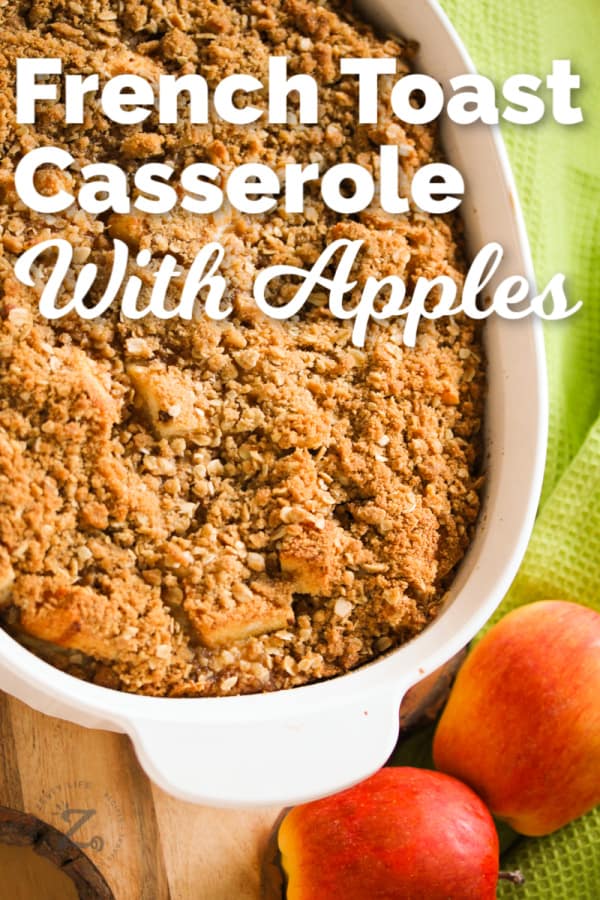 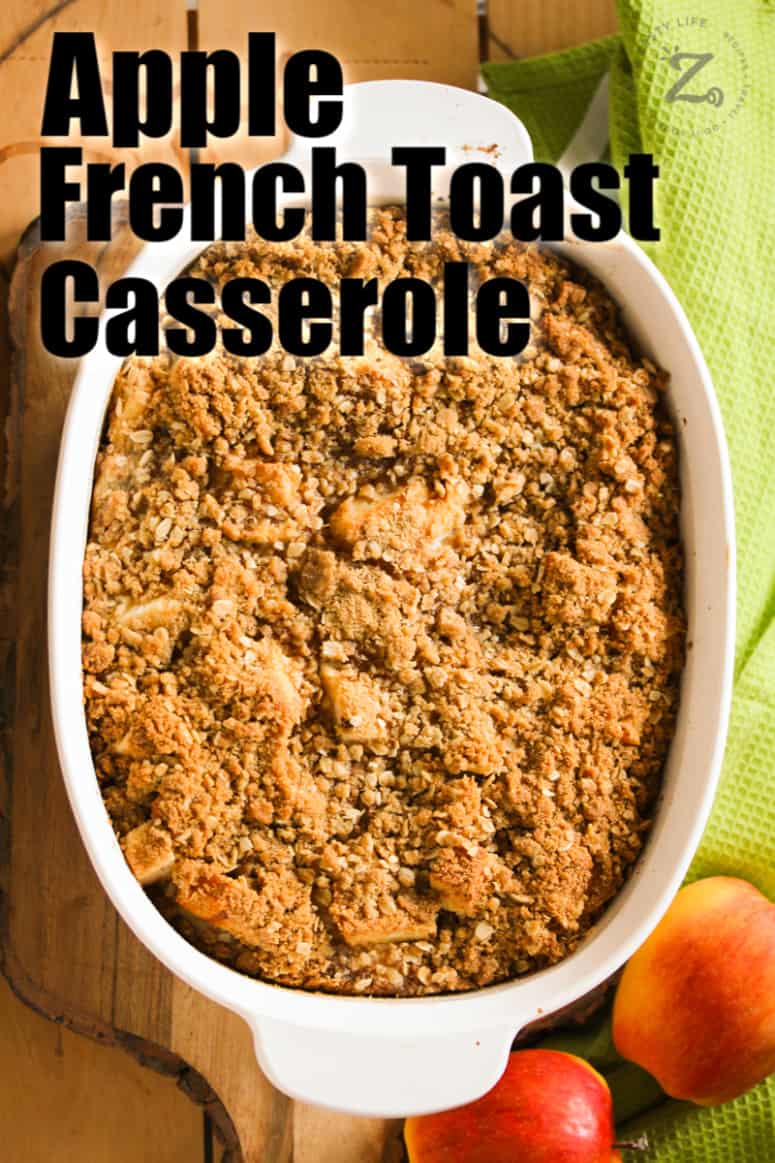 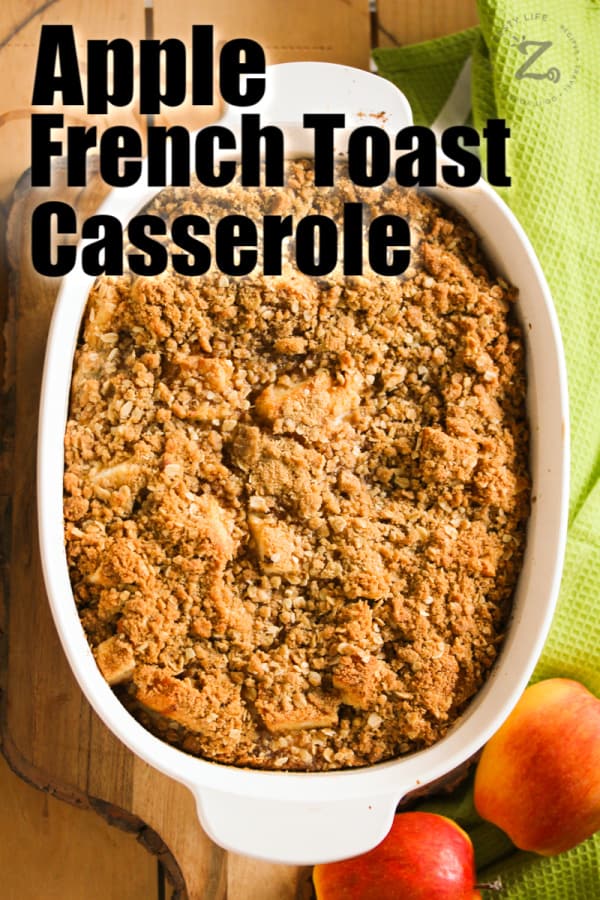 Learn how to make Chicken Fajitas easily in the co

Large cuts of beef, like a Picanha Roast can be in